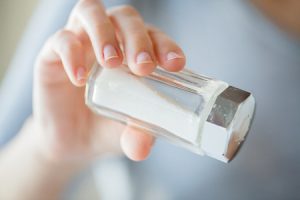 If you don’t take in enough sodium on a regular basis, it could cause problems for your body. Sodium plays a very important role in the human body as it’s responsible for helping control nerve impulses, allowing muscles to contract and relax, and keeping water and minerals balanced. But you don’t want to take in too much sodium day in and day out as that can cause a whole host of problems for you.

When you have too much sodium in your diet, it can force your body to hang on to as much fluid as it can in order to dilute the sodium. This can increase the amount of fluid that you have in your bloodstream, which can cause you to have high blood pressure. High blood pressure can, in turn, cause you to suffer a heart attack or a stroke, and it can lead to kidney problems as well. It’s why It’s important for people to watch how much salt they take in carefully.

Many people are under the impression that table salt is the main contributor to high sodium levels, but this couldn’t be further from the truth. There are so many things that can send your sodium levels soaring if you’re not careful. Everything from condiments like ketchup to prepackaged foods can contain high levels of sodium. It’s important to limit these things if you suspect that you’re taking in too much sodium right now.

You can bring down your sodium levels by eating more fresh foods. Things like fruits and vegetables, meats and poultry, eggs, grains, and more don’t have much sodium in them. You can also keep your eyes peeled for low sodium versions of the prepackaged foods you eat. You can steer clear of dealing with high blood pressure and the consequences that come along with it by cutting as much sodium as you can from your current diet.

Benson’s Gourmet Seasonings can help you cut sodium from your diet with our salt free seasonings and spices. Call us at 626-969-4443 today to order seasonings that will add flavor to your meals without adding sodium to them.