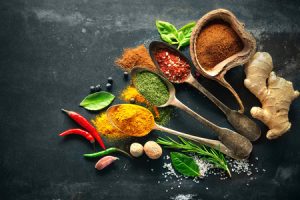 Most people know there is sodium contained in salt. That sodium can lead to health problems like high blood pressure, heart disease, and stroke if you take in too much of it every day. Nevertheless, what people don’t always realize is that there is sodium contained in many other spices, too. Check out some of the spices that contain sodium below, and steer clear of using them too often if you want to prevent sodium from having a negative impact on you.

There are lots of seasoning salts people use when they’re cooking up a meal. These seasoning salts include things like garlic salt and onion. They can have more than the daily recommended amount of sodium in them in many instances. You’re better off using fresh vegetables to season your foods or, better yet, salt-free seasonings that’ll add flavor to your meals without filling them with sodium.

Most of the fresh herbs and spices on the market today don’t contain much sodium in them. Seasonings like cumin, oregano, cilantro, basil, and turmeric are all low in sodium even though they pack a punch in the flavor department. That being said, there are still trace amounts of sodium in them for those who are being picky about not eating a lot of salt.

If your goal is to limit the amount of sodium you take in, Benson’s Gourmet Seasonings can help. We offer salt substitutes as well as salt-free spices that would make a great addition to your kitchen. Call us at 626-969-4443 today to place an order.